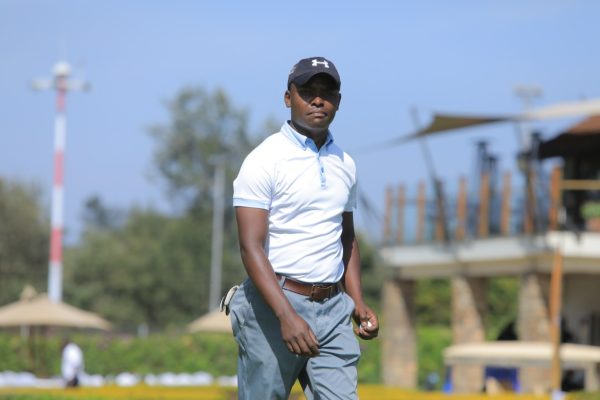 Simon Ngige carded a brilliant six-under par 66 headlined by four birdies and an eagle to take a one stroke lead to the clubhouse in the opening round of the seventh leg of the Safari Tour at Karen Country Club.

The Thika Sports Club player who has already qualified for the upcoming Magical Kenya Open produced a bogey-free round that saw him birdie the par-four-ninth, 13th, 15th and 16th holes. He saved the best for last with an eagle on the par five-18th.

Sigona’s  Mohit Mediratta shot an equally impressive five-under par 67 as he stepped up his hunt for a ticket to Magical Kenya Open. Currently sitting one place outside the Magical Kenya qualification cutline, Mediratta started today’s round aggressively with three back-to-back birdies in the opening holes. A double on the par four-sixth pegged him back briefly but the Sigona player recovered on the back nine for another birdie-run on the 11th, 12th and 13th. He finished strongly with a pair of birdies on the 17th and 18th.

Three players- David Odhiambo, Zimbabwean Visitor Mapwanya and Zambia’s Sydney Wemba- complete the crowded podium places in a three-way tie after carding four under par 68. A total of 15 players registered under-par scores, the highest number witnessed in the opening round on the Tour this season. It was generally a good outing for the foreign pros as they took three places in the top 10 after Zimbabwe’s Robson Chinhoi shot three under par 69 to finish sixth.

“I am happy with the way I played today. I would have definitely returned a better score if I had not lost my ball on the 15th hole. The course is in very good condition so I will be targeting to finish the tournament with a double-digit score,’’ said Chinhoi who is placed second on the Tour order of merit behind Dismas Indiza.

The field of 76 players, which includes three amateurs, will be cut to 20 after tomorrow’s round.

On the PGA Tour, Jordan Spieth shot 9-under 63, his career low at Pebble Beach, to move into contention at the AT&T Pebble Beach Pro-Am event. He started the third round 10 strokes behind the 36 holes leader Seamus Power, but he’s now only one shot behind the leading trio of Beau Hossler, Andrew Putnam and Tom Hoge. Spieth will be looking for a second win in five years after breaking a four-year trophy drought with a win at the Valero Texas Open in April last year. Since winning three major championships and rising to world No. 1, Spieth’s career took a nosedive which saw him fall to no.100 in the world golf ranking. He seems to be rediscovering form and a win tonight will earn him a 13th PGA career title. Patrick Cantlay, the highest-ranked player in the field, shot 68 to stay one stroke behind the leaders in T4 position.