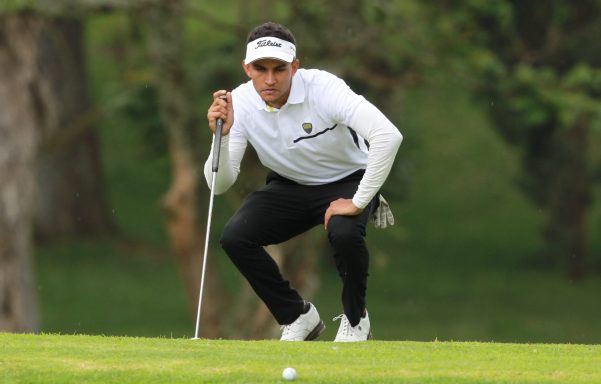 The penultimate round of the Safari Tour will tee up at Karen tomorrow with 14 players- nine locals and five foreigners- locked in an epic battle for qualification to the Magical Kenya 2022 showpiece.

With runaway leaders Dismas Indiza, Zimbabwean Robson Chinhoi, Simon Ngige and Eric Ooko having already booked their tickets to the Euro Tour event, the spotlight will be on the chasing pack as the pros jostle for the remaining five slots reserved for Kenyans and another two left for the foreigners on Safari Tour.

Greg Snow, David Wakhu and Samuel Njoroge currently in 5th, 6th and 7th positions respectively just need to grind a decent result in the remaining two rounds to make a return to the tournament as they have a relatively good points haul to see them through.

Jastas Madoya and Edwin Mudanyi, who are occupying the last two positions above the cutline will be under intense pressure from Mohit Mediratta and Tony Omuli who stand a good chance of causing an upset with positive results in the remaining fixtures.

Though not completely out of contention, it will take some extraordinary performance for CJ Wangai, 16th , and Jacob Okello, 17th , to make the cut.  Nothing short of a win in the remaining events will guarantee the duo an appearance at the Magical Kenya show.

The race for the foreign pros tickets is equally intriguing following increased participation by the visitors. Uganda’s Deo Akope, Malawian Paul Chidale, Andrew Odoh from Nigeria and Zimbabweans Visitor Mapwanya and Tafara Mpofu all stand a chance of bagging the remaining two tickets to join Chinhoi.

Akope, currently in position 11, is the second highest ranked foreigner on the order of merit. His chances were greatly enhanced when he won the Nyali round and finished in the top 10 at the Uganda Open. Chidale and Odoh’s consistency this season could as well see them breast the tape ahead of their colleagues.

Close to 60 pros are expected at Karen tomorrow. They will be joined by leading amateurs who are using the last two Safari Tour events to prepare for the Magical Kenya Open. The Safari Tour is used to select players to Magical Kenya Open with the top eight Kenyans earning automatic entry while another eight slots are reserved for foreign players and sponsor interests. The final ranking is based on 70 percent of points earned in the current season while 20 percent and 10 percent of the points are carried over based on players’ performance in season three and season two respectively.