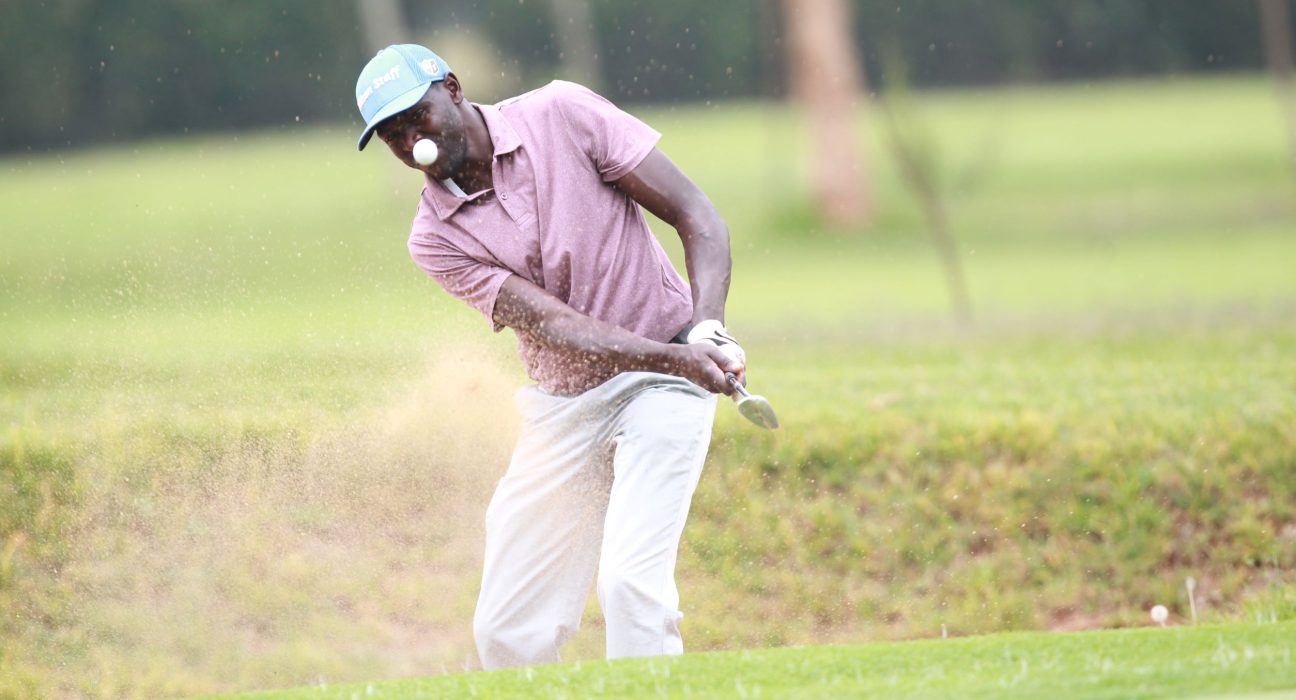 Starting today’s round on the tenth tee, Ooko dropped two shots on number 11 and 13 in a three-putt horror show after going overly aggressive on the greens to go for the interval at two over par 38. The Golf Park man, arguably one of the most consistent performers on the Tour, steadied the ship on the front nine thanks to three birdies on the first, third and ninth holes.

“It took me some time to realize that the greens were playing slightly slower today following last night’s downpour.  Save for the front nine where I three-putted twice, my game today was quite solid. I am happy I hit all the fairways and my approach shots were superb all day. But generally it was a tough day as the course was playing a bit longer,” said an elated Ooko.

Jastas Madoya moved one place up to second position after another level par round for one under par gross. Madoya had an even game on a day that saw the Great Rift player birdie three holes- 3, 15 and 18- but dropped an identical number of shots after a costly double bogey on the par four 13th hole and another bogey on the tough –playing par-3 number 5.

The day’s star performer was Mike Kisia who shot an impressive four under par 68 to move to third place. The Vetlab player had a conservative outing on the front nine where he shot level par but exploded into life on the back nine with two birdies on the eleventh and seventeenth before putting the icing on the cake with a fortuitous eagle chip-in on the eighteenth.

“Today’s outing was tough. The pin positions were quite tricky. I am happy that my short game, especially chipping was on-point. My aggressive play has been well rewarded,” said Kisia who shot five over par 77 yesterday to finish in the 40th position.

Samuel Njoroge surrendered the day one co-leadership after carding three over par 75 today in an erratic display that saw the Kenya Railway player register four bogeys and a double bogey.

Series frontrunners Dismas Indiza and Robson Chinhoi fought back their way into contention after registering identical one under par 71 scores to join Kisia in the red numbers today.  Chinhoi moved up the leaderboard to T7 on three over par gross while Indiza settled for T12 on five over par gross and will go into tomorrow’s “moving day” round seven shots behind the leader.

Twenty-six players including two amateurs- John Kariuki and Njoroge Kibugu- made the cut. It was a baptism of fire for South Africa-based Daniel Nduva who missed the cut on his first pro outing at home. Nduva who turned pro last year, shot a messy eight over par 80 today to bow out on nine over par gross.  Six foreigners- Chinhoi, Deo Akope and Silver Opio (Uganda), Sunday Olapande (Nigeria), Tafara Mpofu and Nyasha Muyambo (Zimbabwe)- made the cut.