Safari Tour: Locals under pressure as foreign pros throw down the gauntlet
News 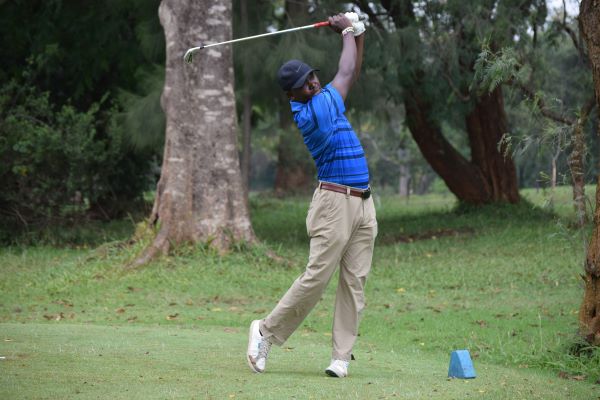 It was another low scoring day that saw seven players miss the cut despite scoring sub-par rounds as the cut line moved to level par. In an unprecedented occurrence, a record 24 players shot under-par today as some notable names – Samuel Njoroge, Edwin Mudanyi, Tony Omuli, Andrew Odoh and Paul Chidale- failed to make it to the money bracket.

The foreign pros came out guns blazing seizing six of the top 10 positions as they seek to secure back-to-back victories following Zimbabwe’s Robson Chinhoi victory in the last outing at Limuru.

Four birdies each on the front and back nine, thanks to a sharp short game, were enough to move the Zimbabwean into contention. Muyambo said: “It’s always nice to be in pole position. I am happy with my game at the moment and I will keep on chasing the target I set myself of winning at least one event this season.”

Ngige kept his cool today, only dropping a shot at the 17th, as a streak of seven birdies for a 66 round preserved his place in tomorrow’s final group. “The course is playing well and that has given us a good chance to score,” said Ngige.

It was a bad day in office for Mohit Mediratta who shot a measly three over par 75 to drop 10 places to T12. His compatriots David Odhiambo and Rizwan Charania were not lucky though. After a brilliant opening round 68 that catapulted him to third, Odhiambo booked an early ticket home after a catastrophic six over par 78 outing. He was joined in the exit lounge by Charania who’s round of 77 was not good enough to keep him at Karen for the remaining rounds.

Jacob Okello resuscitated his hopes of making it to this year’s Magical Kenya after a consecutive level par round ensured he advances to the final rounds as the veteran chases the crucial “Road to Magical Kenya” points.

Fireworks is expected at tomorrow’s round as Ngige fights to drop the near-man badge that he’s donned for a long time. Not new to being in pole position in the opening rounds, the Thika player has been unable to convert the leads into outright wins. In fact, he has never tasted victory on Safari Tour. Mapwanya will also be going for his maiden victory after blowing hot and cold throughout the season, a feat that could see him emerge from Chinhoi’s shadows.  Unheralded Nigerian Sunday Olapade is also queueing up to be counted among first time winners after sneaking into fourth position on the leaderboard following today’s five under par 67 round.

Meanwhile the star continues to shine for the little-known players in international golf. The latest minnows to upstage household names were Americans Tom Hoge and Harold Varner III who registered emotional wins at the weekend.

Hoge won his first trophy in 11 years when he outdueled crowd favourite Jordan Spieth to lift the AT&T Pebble Beach Pro Am trophy. The 32-year old American carded three birdies in the last five holes to win for the first time in more than 200 career starts. The win has seen him rise to world no.39, his highest ranking ever, and a maiden ticket to this year’s Masters tournament at Augusta. Hoge’s career has been on the upward in the last two years a run that saw him finish second two weeks ago at the American Express outing.

Harold Varner III drained a 90-foot eagle putt at the Saudi International for a first win in five years. He outclassed a star studded field that included Dustin Johnson, Bryson DeChambeau, Bubba Watson and Phil Mickelson at the lucrative Asian Tour event. The African American golfer’s previous notable triumph was at the Australian PGA Championship in December 2016. The win saw the 31-year-old break into the world top 50 ranking for the first time.

Action on the PGA Tour moves to WM Phoenix Open this week where a strong field comprising of six of the top 10 world players will be in contention. Catch all the action exclusively on DStv. DStv premium customers can watch in HD using the Explora decoder. Visit www.dstv.com to subscribe or upgrade, and join in on the excitement. And while you’re on the move, you can stream matches on the DStv App.