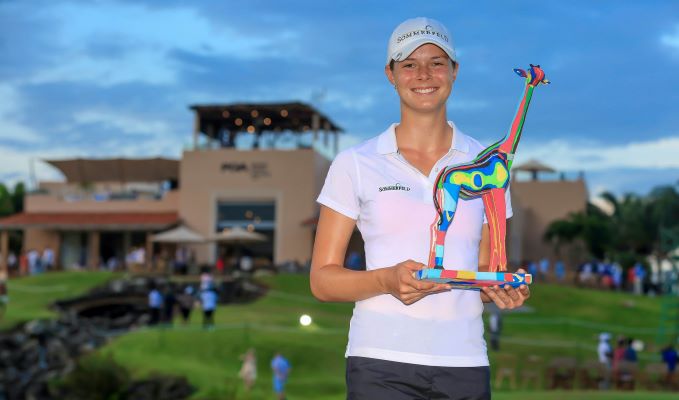 Defending champion and 2019 Order of Merit winner Esther Henseleit heads a star-studded field of 96 golfers as The Ladies European Tour (LET) season gets underway at Vipingo Ridge this week.

The 72-hole stroke play event, back in Kenya for the second time, brings together players from 23 countries playing for the Kshs 38.8 million prize purse in an event that will be screened in more than 69 countries worldwide February 10-13.

Defending champion Henseleit who carded a course record eight under par 64 to win the inaugural Magical Kenya Ladies Open will be up against four players who finished in the top 10 at Vipingo in 2019. The sternest test will be posed by Sweden’s Julia Engström who finished third at Vipingo after a dramatic battle with Henseleit that went to the wire.

Engström, who has won on the LET twice, will be hoping to recapture her form at Vipingo after staying out of the game with a back injury. Other players who are familiar with the Vipingo course and are seeking to stop Henseleit include Austrian Christine Wolf who finished fifth, German Olivia Cowan (T9) and Manon De Roey of Belgium who finished T9 at the inaugural event.  Cowan and Finland’s Sanna Nuutinen have been admitted to the LPGA Tour and will want to celebrate their elevation with a win at Vipingo. Nuutinen was ranked fourth in the LET 2021 order of merit.

The Magical Kenya Ladies Open to be played on The Baobab course at Vipingo Ridge, is the first event in the 2022 Ladies European Tour season which features 31 events with a €24.5 million prize purse, the highest in LET’s  44-year history. The Baobab course, Africa’s only PGA-accredited course, is in great shape following upgrading of all greens to Paspalum Marina grass. The project which took seven months at a cost of Kshs 16 million, involved replacing all the old greens with a better denser grass type for better ground cover.