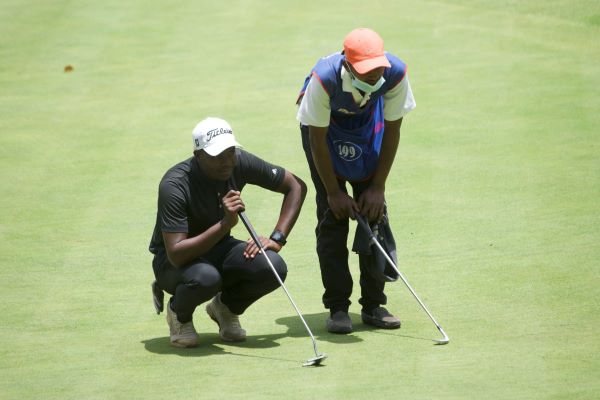 Daniel Nduva shot the day’s best round five under par 66 to set up an exciting contest with run-away leader Robson Chinhoi tomorrow at Muthaiga. The South Africa-based player’s exquisite round made up of an eagle, six birdies, eight pars and two bogeys cut Chinhoi’s lead to three shots restoring interest in the contest after the Zimbabwean had threatened to run with the title effortlessly.

Starting the day seven shots behind the leader, a good run on the front nine saw Nduva birdie number two, three and four, drop a shot at the par three number five but picked a priceless eagle on the number seven par-5. The youthful pro maintained the tempo on the back nine where he only dropped a shot on the number 11 par-3 but finished well with three more birdies.

Chinhoi inexplicably relaxed his stranglehold despite opening a seemingly unassailable lead after birdieing number four, six and seven for an impressive three under 33 at the interval. The prolific Zimbabwean picked another back-to-back birdies on number 10 and 11 before switching off in the ensuing four holes where he dropped five shots, including a double bogey on the tricky par-3 number 13, to open the window for the chasing pack.

Veteran Dismas Indiza carded a decent four under 67 to revive his faint hopes of winning the Muthaiga leg. A strong finish with four birdies on the back nine- 10, 14,17 and 18- saw the veteran move up to third on the leaderboard rekindling hopes of another final day battle with his arch-rival Chinhoi.  His heroics today earned him a place in the final group where he will tee up alongside Nduva as they seek to stop the Zimbabweans dominance.

Amateur John Lejirma produced another superb 67 to move up to fourth in a morale-boosting performance ahead of Magical Kenya Open. An eagle on the par-5 number 10 plus three birdies on number three, six, nine and 12 should give the Railway player the much needed confidence as he prepares to debut on the big stage next month.

Fans are guaranteed of a super-finish tomorrow as head-to-head duels between Chinhoi and Indiza are never short of drama. The Zimbabwean got the better of Indiza last week at Karen after he stopped the veteran on the third play-off hole for his third win of the season. It will be interesting to see how the inexperienced Nduva will fit in the high-octane threesome. Nduva had an unconvincing debut on Safari Tour last month when he missed the cut at Limuru. He however went one better last week at Karen where he finished in position T14 and will be relishing to take a shot at the title tomorrow only in his third appearance on the Tour.