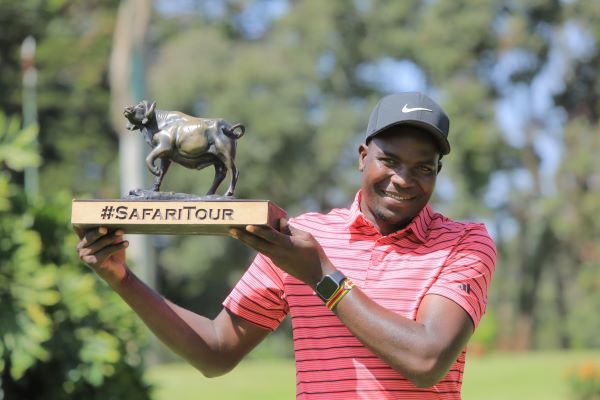 Zimbabwe’s Robson Chinhoi eagled the par-5 number 18 at Muthaiga to complete a wire-to-wire performance as he bagged his fourth win on the Safari Tour this season. Chinhoi carded two under par 69 in a tense final round that was brought to life in the last four holes to beat Daniel Nduva by four strokes taking home Kshs 433,333.

Chinhoi stretched his advantage over Nduva to four shots at the interval after carding one under par 35 on the first nine comprising of three birdies -2,6 and 7- plus two dropped shots on number five and nine. Nduva’s challenge started on a shaky note as the South Africa-based pro dropped two shots after losing his ball off the tee on number six and followed it with a bogey on number nine for one over gross 37 to drop five shots off the pace.  He recovered quickly with an eagle on number 10 but an inspired Chinhoi widened the lead with birdies on number 10 and 12.

Then things started taking a dramatic turn when the two front runners missed the par-4 number 14 fairway off the tee. While Nduva found the green on three, Chinhoi fell shot by one on approach and two-putted for double bogey as Nduva tapped in for bogey to cut the deficit to four shots. Matters got dicey, on number 15 when Chinhoi found water off the tee, chipped on exquisitely but two-putted for bogey as Nduva made a tap-in birdie to cut the deficit to two. The pair went on trade pars on the par-3 number 16 before Nduva birdied number 17 after driving the green as Chinhoi missed a short putt for par reducing his advantage to only one going to the final hole.

Both players struck excellent tee shots on the par-5 number 18 to within 180 yards. With adrenalin kicking in, Nduva blocked his second shot to the bush on the right completely blocking his view of the green. The Zimbabwean seized the opportunity, hit a sumptuous nine iron 12 feet off the cup and rolled in a priceless eagle as Nduva salvaged a bogey to take home Kshs 306,667.

“This is a well-deserved win. Although there were a few anxious moments out there today, I managed the situation since I have been in very good shape this season. I have really been hitting it well. I am feeling very confident as we approach the Magical Kenya Open,” said Chinhoi.

Nduva who was not named in the team to Magical Kenya Open is optimistic that he will be considered for a wild card. He only managed to play in three Safari Tour events this season with the bulk of his time spent on the Sunshine Tour. He said: “I am happy with the way I played this week and the previous one. Considering that I have not had competitive golf since November, I think my performance on Safari Tour has been good. It’s been fun playing against local and foreign pros on Safari Tour and honestly I have learnt a lot.”

Dismas Indiza finished strongly with the day’s best round of five under par 66 to finish third on -10 gross. The veteran had a fine final day outing with a bogey free opening nine for two under 34. Another good run on the back nine headlined by a show-stopping eagle on number 18 earned Indiza a cool Kshs 247,556 pay.

Following today’s win, Chinhoi has registered an unprecedented four wins this season after previous wins at Vetlab, Limuru and Karen. He however finished second to Indiza in the 2021/2022 season order of merit. Twenty-two players shot under par rounds with Chinhoi the only players to shoot under par on all the four days.  Today’s round marked the end of Safari Tour which was played over eight legs.

Eight local top 10 players on the order of merit earned qualification to Magical Kenya Open which will be played at Muthaiga from 3rd to 6th March 2022. They are Indiza, Simon Ngige, Erick Ooko, Greg Snow, Jastas Madoya, Samuel Njoroge, David Wakhu and Mohit Mediratta. The two slots reserved for the foreign pros on Safari Tour were awarded to Chinhoi and Malawi’s Paul Chidale.