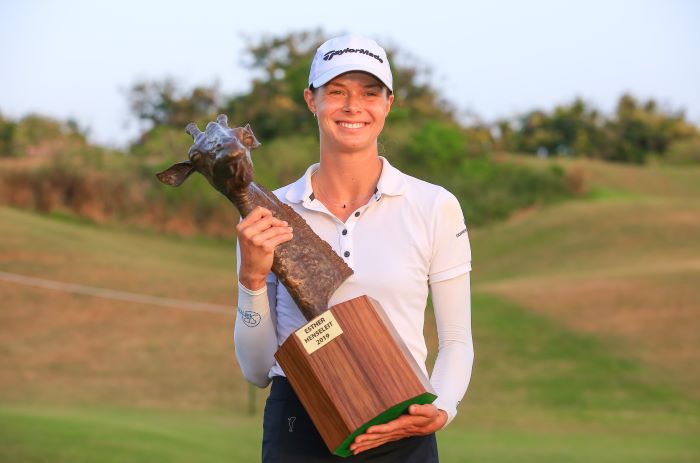 Esther Henseleit successfully defended her Magical Kenya Ladies European Tour title to take home a cool Kshs 5.8 million after carding a nervy two under par 70 in the final round at the Vipingo Ridge.

In a tense finish, Henseleit had to dig deep in the final two holes as she labored to produce a brilliant up and down on 17 and 18 to save bogey and par respectively. All had been going on smoothly for the 23-year-old German until her ball found water on the par three 17th after she misjudged the strong wind.

She seized the lead from 54-hole leader Linnea Strom of Sweden at the 10th hole after a cagey opening nine.  The three players in the final group which included Luna Galmes of Spain had a shaky start bogeying number one after they all failed to hit the green on regulation. The trio recovered fast enough with birdies on the par-5 number two.

Henseleit who was three shots behind the leader at the start of the day, started making ground on Strom on number three with a birdie to cut the deficit to two. A dropped shot by Strom on the par-5 number four reduced her lead to one as Henseleit parred the hole. Both birdied the par-5 number six before Esther evened matters with a birdie on the par-3 number eight and closed with a tap-in par on the ninth for a morale boosting three under 33.

It was advantage Henseleit after number 10 when Strom dropped another shot. Strom went on to miss a tap-in birdie putt on number 11 as Henseleit stretched her lead to two with a routine birdie. Another dropped shot after missing the fairway on number 13 brought Strom’s challenge to a premature end. Three more bogeys for a round of five over 77 saw the Swede, who led in the opening three rounds, drop to third position behind Marta Barrio of Spain.

“It was a struggle out there but I am proud of my play especially in the last holes where I holed some tough long putts. It was tough for me on the 17th and 18th greens since my putting hasn’t been that good lately. I am so happy to win here again,” said Henseleit who won the inaugural Magical Kenya Ladies Open in 2019 to become only the third player in the history of the Ladies European Tour to capture the Order of Merit and Rookie of the Year titles in the same season.

Barrio shot the round of the day, carding three under 69 to move up four places on the final day. Starting the day five shots off the pace, the Spaniard dropped one shot on the front nine and went on an astonishing run on the back nine with four birdies in a bogey-free performance.

South Africa’s Lee-Anne Pace finished strongly on one over 73 to move into position five, one shot better than Eswatini’s Nobuhule Dlamini who finished T8.

The Magical Kenya Ladies Open is the first event in the Ladies European Tour 2022 calendar which features 31 tournaments.  The event brought together 94 players from 23 countries.