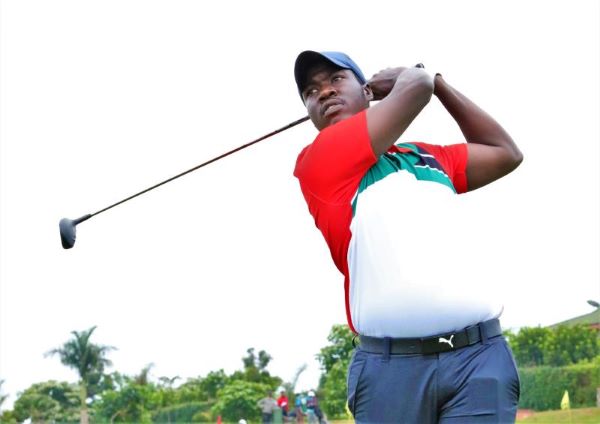 Zimbabwe’s Robson Chinhoi shot an amazing seven under par 28 on the back nine at Muthaiga Golf Club on his way to taking an early lead in the final leg of the Safari Tour.

Chinhoi who won last week’s Tour at Karen closed the day on seven under 64 after carding level par on the front nine pegged back by a double bogey on the par-3 second hole and another dropped shot on number eight. Chasing an unprecedented fourth win of the season, Chinhoi eagled the par-4 number 17 and followed it up with another eagle on the par-5 number 18.

Daniel Nduva is a shot behind after carding six under 65 today.  The South Africa-based player had a bogey free first nine where he birdied number four and seven. An eagle on number 10 followed by four quick-fire birdies on 12,13, 17 and 18 were enough to keep Chinhoi at the summit, a double bogey on the par-4 number 15 notwithstanding.

Paul Chidale completed the podium places after a five under 66 opening round as the Malawian notched six birdies and dropped only one shot at the par-3 number 16.

It was a good day for the foreign pros as they laid claim to 50% of the slots in the top 10 after Nigeria’s Andrew Odoh shot -3 for T4 while Uganda’s Ronald Rugumayo is in T6 on -2, one shot better than Zimbabwean Nyasha Muyambo and Uganda’s Gaita Rodell in T8.

Jastas Madoya in T4 is the third placed Kenyan after posting three under 68 one better than Isiah Otuke in T6. Other Kenyans in the top 10 include Dismas Indiza, Eric Ooko and Frank Matilo tied in 8th position after carding one over 71.

Kshs 3 million up for grabs at Safari Tour season finale