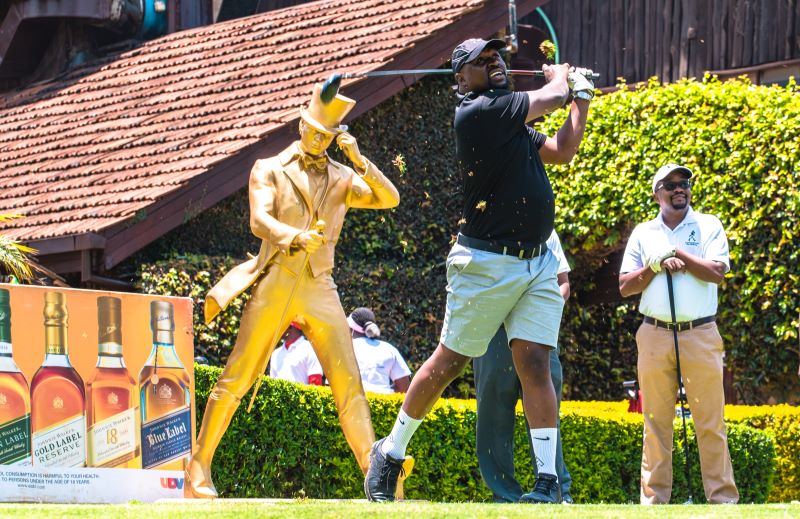 The third leg of the Safaricom Golf Tour will take place at the Muthaiga Golf Club this weekend. The tournament has attracted over 200 amateur and professional golfers who will be taking part in the 18-hole, corporate tournament on Saturday with over 100 junior golfers set to grace the course on Sunday.

The Junior Golf tournament will also double up as a US Kids Golf local tour event, which kicked off with the Limuru leg of the Safaricom Golf Tour two weeks ago.

“We have seen some exciting action over the first two legs of the inaugural Safaricom Golf Tour especially with the junior tournaments. We also continue to hold clinics for young aspiring golfers as we look to demystify the sport and position it as one that is more accessible”, Said Peter Ndegwa, CEO, Safaricom.

Safaricom has invested KES 100 million in the golf tour, which aims at nurturing and growing talent in the country. The tour will be played in 14 golf clubs across the country.

The Johnnie Walker Golf Series dubbed ‘Road to Gleneagles’ returns this weekend with the 10th leg set to be held at Thika Sports Club where more than 100 golfers drawn.

The players will participate in the tournament’s fourball stableford format, with the top three teams qualifying to play at the tournament’s Eagles Round (semi-finals) to be played at Muthaiga Golf Club in May. So far,

“As we head to Thika Sports Club this weekend, we expect some very entertaining golf action as we have had in the previous events. This being the 10th event, we are happy with the progress of the Road to Gleneagles golf series so far as we have had a good number of participants. We are proud to have offered many golfers across the country a chance to compete in the tournament, which is an opportunity for them to better their skills,” observed Josephine Katambo , Kenya Breweries Limited’s (KBL) Marketing Manager for Spirits.

Nyanza Golf Club will tomorrow host the second leg of the 2022 NCBA Golf Series. This follows the first leg of the Series that was held on 26th February at the Railways Golf Club. Over 100 golfers are expected to tee off at the nine-hole lakeside golf club starting 0700hrs.

Speaking ahead of the tournament, John Gachora, Group Managing Director, NCBA Group said: “We are delighted to be taking the second leg of the 2022 NCBA Golf Series to Nyanza Golf Club. Having missed the opportunity to host the tournament there in 2021, we made a deliberate decision to include it early in this year’s calendar.”

Fifteen amateur events and three junior tournaments have been lined up in the Series calendar, set to be held across different golf clubs in Kenya, Uganda, and Tanzania. This will culminate in the tournament’s grand finale to be held at the Muthaiga Golf Club where a fully-paid trip to South Africa’s Fancourt Country club for the best four players will be up for grabs.

Four winners from each of the participating clubs will get automatic qualifications to play at the tournament’s Grand Finale. The criterion will see the competition’s Division One (handicap 0-9) winner, Division Two (handicap 10 – 19) winner, Ladies’ Category winner, and the Junior Category winner get an automatic qualification. The tournament is part of the company’s commitment to supporting the growth of golf in the country, by providing a platform for amateur and junior golfers to play and better their skills.

Meanwhile on the PGA Tour, the first round of the 2022 Players Championships was disrupted by heavy rains as play was suspended for close to five hours. More than half the players in the star-studded field did not complete their rounds while some had not even teed off by end of day. The affected players who include defending champion Justin Thomas will tee it up early this morning to chase the six under 66 score set by co-leaders Tommy Fleetwood and Tom Hoge. Four players, Kramer Hickok, Joaquín Niemann, Keith Mitchell and Anirban Lahiri are tied in second position a shot behind.

Follow all the action from the PGA Tour’s The Players Championship at the TPC at Sawgrass in Ponte Vedra Beach, Florida live on DStv till Sunday 13 March 2022. Visit www.dstv.com to subscribe or upgrade, and join in on the excitement. And while you’re on the move, you can stream matches on the DStv App.