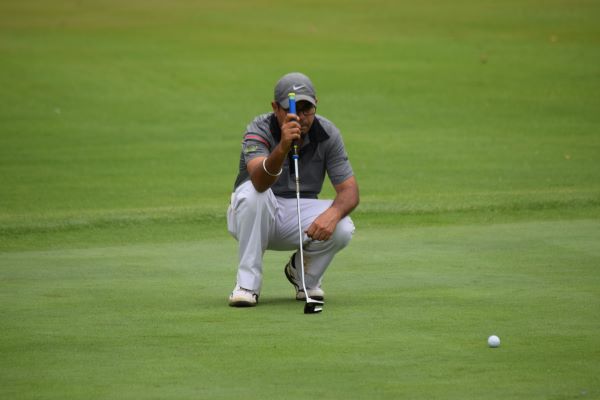 Former Kenya number one amateur player Jay Sandhu boosted his chances of winning this year’s Kenya Amateur Golf Championship with a commanding win at the Windsor Classic. Sandhu led from start to finish at the 54-hole event for a gross score of 219, three shots better than Rwanda’s Celestine Nzanzuwera.

“My game is in very good shape at the moment. I have increased my practice rounds and time spent on the practice range and this is really paying off, “said Sandhu who won the Sigona Bowl tournament early this year.

A sharp short game and a hot putter saw Sandhu destroy the 96-man field which included John Lejirma and Dennis Maara. He carded 70 and 74 in the opening rounds to open a six-point gap atop the leaderboard but lack of concentration and fatigue in the final round almost cost him the title.

Motivated by the second victory on the trot, Sandhu now plans to play in more KAGC events to meet the minimum requirement of 10 events in a bid to win the series this year. “The key to achieving this target will be to work on match fitness. The KAGC series is quite demanding and to compete well against the young players I have to really push it especially in 54-hole events,” said the veteran who finished 11th in the series last year after only playing in five events.

The win at Windsor was enough for Sandhu to maintain the top position in the series despite skipping the Mount Kenya championship. He’s currently 68 points ahead of Ruiru’s Christopher Andrea while Maara is placed third in the latest KAGC order of merit.

Sandhu is optimistic of widening the lead this week as the series heads to Muthaiga in a busy season that comprises more than 20 events.

On the PGA Tour, The Players Championship is expected to end tonight after storms disrupted play on the first three days. India’s Anirban Lahiri is currently the leader on nine under par, two shots better than Paul Casey.  Lahiri, who is ranked 322 in the world birdied five holes in the opening nine holes of his third round to take the unexpected lead after many marquee players exited early for failing to make the cut. Among the surprise exits include Collin Morikawa, Patrick Cantlay, Justin Rose, Jordan Spieth, Xander Schauffele and Brooks Koepka.

Defending champion Justin Thomas, in T18 on -4 gross, is still optimistic of being the first player to win The Players Championship back-to-back. Follow all the action from TPC Sawgrass in Ponte Vedra Beach, Florida live on DStv. Visit www.dstv.com to subscribe or upgrade, and join in on the excitement. And while you’re on the move, you can stream matches on the DStv App.