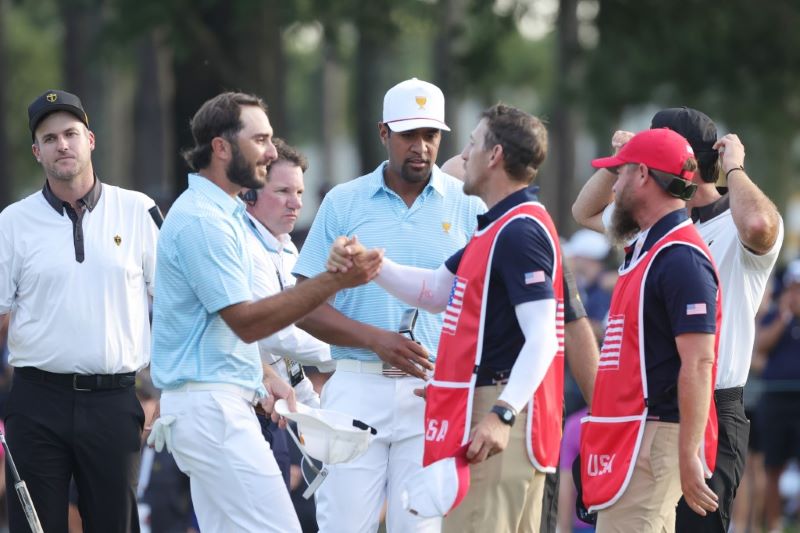 Justin Thomas and Cameron Young sank clutch putts and the United States blunted a back nine fightback to lead the Internationals 4-1 after Thursday’s opening Presidents Cup matches. The Americans dominated early then held on in foursomes (alternate shot) matches at Quail Hollow, stretching their Presidents Cup win streak in the format to 16 sessions since 2005.

Thomas sank a 27-foot par putt to win the crucial 15th hole to give him and Jordan Spieth a 2&1 triumph over Corey Conners and Im Sung-jae. Young sank a 26-foot birdie putt to win the 17th as he and Collin Morikawa beat South Koreans Lee Kyoung-hoon and Kim Joo-hyung 2&1.

“We had some matches that we played really solid and some that were really a grind,” US captain Davis Love said. “A great start, a lot of heart.” The Americans lead the all-time rivalry 11-1-1 and have never lost on home soil, having won the past eight consecutive Cups.

Tokyo Olympic champion Xander Schauffele and 2021 PGA Tour playoffs winner Patrick Cantlay ripped Masters winners Hideki Matsuyama of Japan and Adam Scott of Australia 6&5 in the opener. But the other matches were tight to the finish, with South Korean Kim Si-woo and Australian Cameron Davis winning the last four holes in a 2-up victory over top-ranked Scottie Scheffler and Sam Burns.

“We hung in there. We got off to a tough start and were behind the 8-ball early,” said Internationals captain Trevor Immelman. “We’re going to have to find a way to make a few putts in the next few days. But we’ll hang in there. That’s what we do. We’ll never quit,” he said.

Max Homa and Tony Finau won 1-up over Canada’s Taylor Pendrith and Chile’s Mito Pereira after Pendrith missed a 10-foot par putt at 18.

The Americans are huge favorites with 10 of the world’s 16 top-ranked players to none for an International roster decimated by defections to the LIV Golf Series. The teams will battle it out tonight in five four-ball contests.