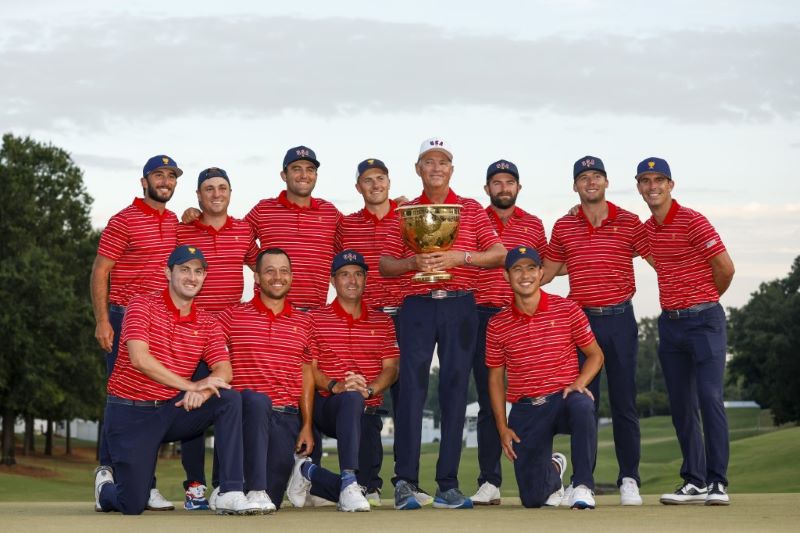 The United States won the Presidents Cup for a ninth consecutive time on Sunday with Olympic champion Xander Schauffele delivering the clinching point in a 17.5 -12.5 triumph over the Internationals.

Schauffele never trailed in defeating Canada’s Corey Conners 1-up, sinking a three-foot par putt at the 18th hole to lift the US squad to 15.5 points and seal the overall triumph at Quail Hollow. “It feels good to win,” Schauffele said. “It got pretty close there for a little bit. Winning is winning.”

The Americans, who led 11-7 entering the 12 final singles matches, improved to 12-1-1 in the all-time rivalry and have never lost on home soil. “They played great,” US captain Davis Love said. “It was hard. They put in a lot of effort the last three weeks. They came in ready to go,” he added.

The Internationals couldn’t make the greatest last-day comeback in Presidents Cup history and haven’t lifted the trophy since 1998. “We’re a little disappointed,” Internationals captain Trevor Immelman said. “We believed in ourselves. We had an amazing week. They were fighting. These guys have massive hearts. I’ll go into battle with them any day,” Immelman said.

With 10 of the world’s 16 top-ranked players, the US team was a heavy favorite over a global side that lost British Open champion Cam Smith and several other top players who jumped from the PGA Tour to LIV Golf, making them ineligible.

The tournament featured three formats of play- fourballs, foursomes and singles over a period of four days with a total of 30 points up for grabs. The US has only lost once since the competition started in 1994. The only success for the Internationals came in 1998 when the event was staged in Melbourne.

Guide to Lowering your Handicap