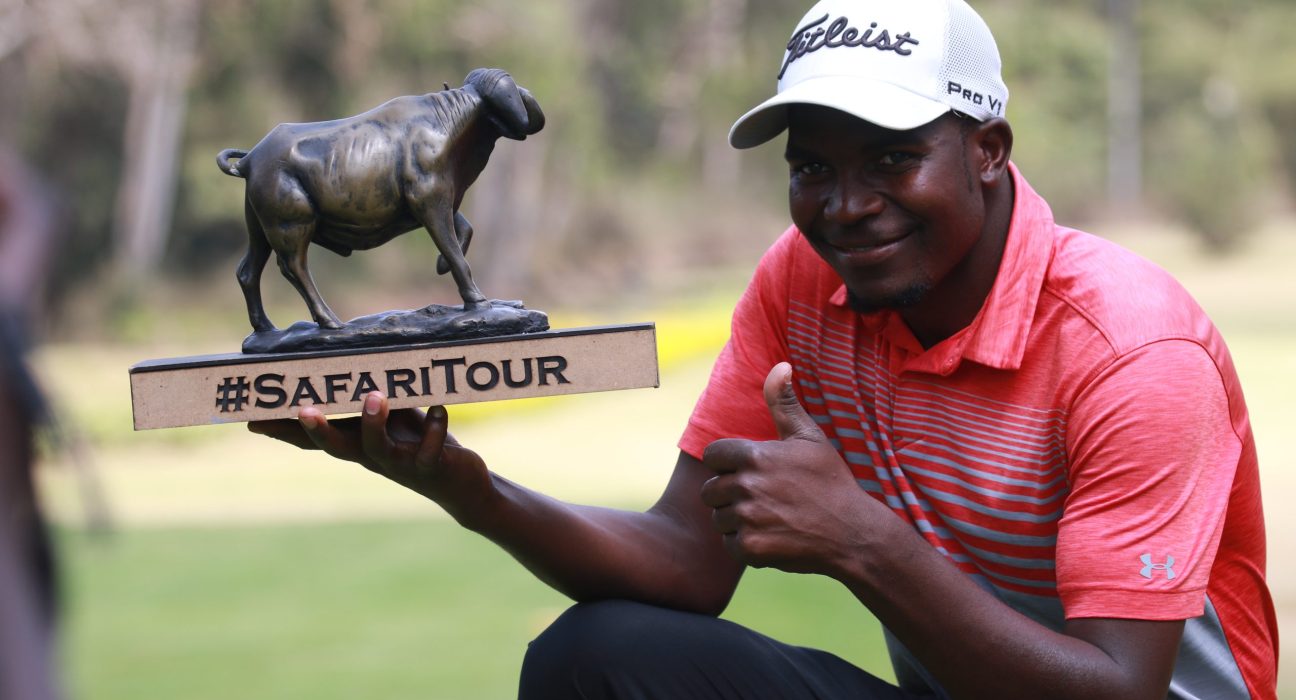 Zimbabwe’s Robson Chinhoi carded two under par 70 to capture his second Safari Tour win of the season after outlasting 54-hole leader Eric Ooko in an epic final round showdown at the Limuru Country Club. The two went head to head in a team also featuring day three co-leader Jastas Madoya in a contest that saw the Zimbabwean seize the lead on the 12th hole.

Ooko seemed to be steadily cruising to victory and was firmly in control on the front nine though the Zimbabwean had cut his lead to only one shot on the turn. He dropped a shot on the par-3 fifth hole but restored parity on the ninth with a priceless birdie as Chinhoi gained ground after two birdies on the fifth and seventh assuaged the pain of a dropped shot on the second hole.

But the game turned on its head on the back nine when the Golf Park player started losing precision off the tee. Trouble started on the 10th hole when Ooko missed the fairway and dropped a shot to go all square with Chinhoi. He went on to save par on the 11th hole after another poor tee shot but ran into trouble on the 12th hole when he dropped a shot as Chinhoi sank a birdie to go two shots clear.

Another bogey on the 13th all but ended the contest, though a bogey by Chinhoi on the 15th narrowly revived hopes of a photo-finish. The Zimbabwean calmly parred number 16 and 17 before unleashing the killer blow with a birdie on the last hole to hold on to another famous triumph on the Tour.

It was a bad day in office for Madoya who fell off the pace way before the interval denying fans the eagerly anticipated three-horse duel. The Uganda Open champion dropped five shots in the opening nine including an expensive double bogey on the ninth when he went out of bounds off the tee. Shell-shocked, Madoya failed to recover on the back nine carding two over par for a disastrous seven over par 79 round to finish a distant fourth, one shot behind Samuel Njoroge.

David Wakhu came back to life on the closing day with a blistering four under par 68 round to move up to seventh overall a shot shy of Mike Kisia and Simon Ngige.

But the pride of place goes to junior amateur Njoroge Kibugu who finished T8 alongside veteran Dismas Indiza on eight over gross. The youngster who’s been playing in South Africa has been steady all week and even managed a sub-par round when he shot a decent 70 on day three. A total of nine players recorded under par rounds during the week with Chinhoi bagging the highest return- 71,69,70- in the last three rounds.

Following the victory, Chinhoi took home Kshs 319,091 while Ooko and Njoroge pocketed Kshs 176,364 and Kshs 148,364 for finishing second and third respectively. The remaining two rounds of the Tour will be held in Karen and Muthaiga next month.