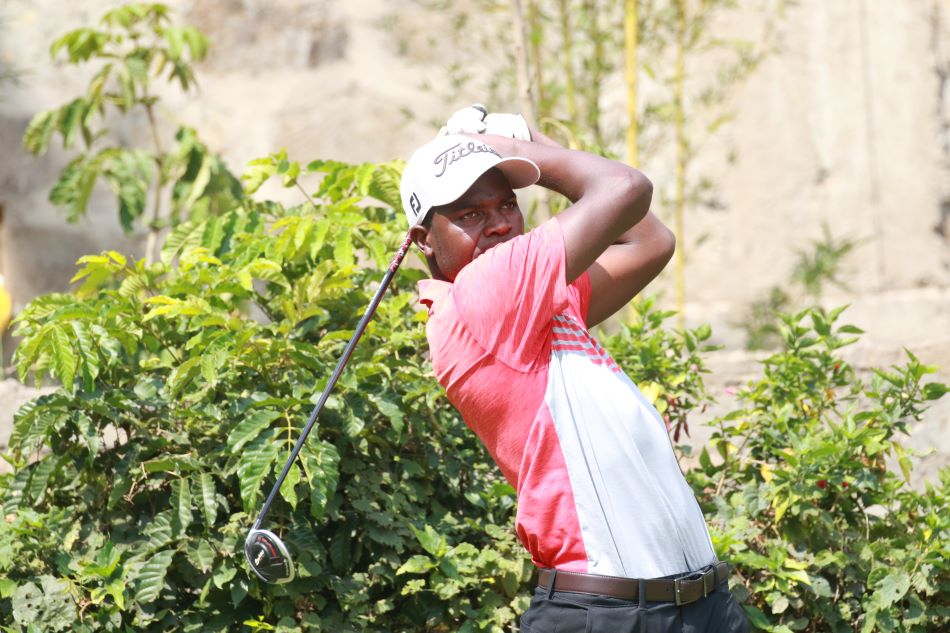 Robson Chinhoi shot three under 69 to take a three-shot lead ahead of the Kenyan duo of Dismas Indiza and Samuel Njoroge in the opening round of the Uganda Open at the par 72 Lake Victoria Resort.

Chinhoi carded a brilliant four under 32 on the front nine after a run of five birdies. An eagle on the par-5 13th hole minimized the damage on the back nine as the Zimbabwean signed off with 37 for an overnight lead.

Indiza stayed on course to reclaim the title he lost last year to compatriot Justus Madoya after closing the day on level par. A flawless display on the back nine where he birdied the par-5 13th hole for one under 35 kept the veteran golfer in the hunt ahead of tomorrow’s second round. He’s joined in second by Samuel Njoroge.

“I had a good game today but made many wrong decisions on the green. Finishing second today is a fairly good start but I will really push myself a lot tomorrow to shoot under par,” said Njoroge.

Seven players, including two Kenyans- Njuguna Ngugi and Robinson Owiti- are tied in fourth position, four shots off the pace. The Kenyan legion of 30 players will be banking on history as they chase the Kshs 3.5 million cash prize, the highest payout on the Safari Tour this season, to be shared out among the top 30 players who will make the second round cut.

“The course gave us a very good test today with varying conditions especially a windy morning. The greens are a bit soft thus calling for increased accuracy and controlled ball spin. I was very patient today and putted very well making some good saves,” said Njuguna, who saved a par on the par-5 number 13 after driving the ball out of bounds.

Indiza is the most successful player at the tourney having won the event a record six times in the last 15 years. He won the event back-to-back from 2007 to 2012, apart from 2009, and went on to recapture the title in 2018.  Deo Akope is the most decorated Ugandan with two wins. The locals last won the event in 2014.

Apart from the Kshs 3.5 million cash prize, the entire 100-man field is chasing points in the “Road to Magical Kenya” league which will see eight Kenyan pros and two foreign pros clinch slots to next year’s Magical Kenya Open.

Last year, pros from Kenyan had a highly successful outing clinching the top two positions courtesy of champion Justus Madoya and Indiza while Njoroge and Ooko finished in the top 10. Chinhoi is chasing a second win at the tourney having won the event in 2019.