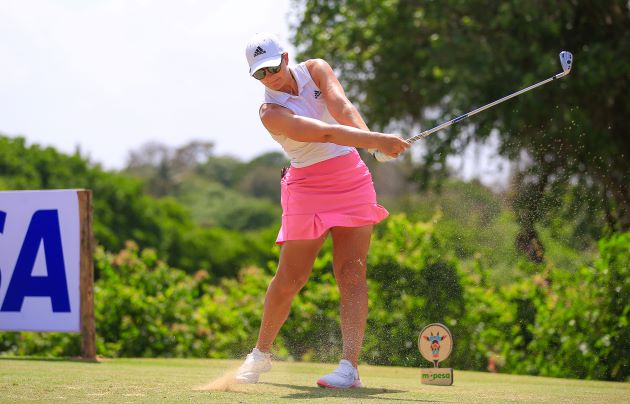 Sweden’s Linnea Strom maintained the lead at the Magical Kenya Ladies European Open staying ahead of the field for the third consecutive day after posting level par 72 today at the tough-playing Vipingo Ridge course.

Strom started poorly with a bogey on the opening hole and number three but recovered with priceless birdies on number six and nine for a level par round on the front nine. Two birdies and an identical number of bogeys on the back nine were enough to entrench her firmly in pole position.

Said Strom: “It was a steady day. I started off a little bit tricky with two bogeys in the first three holes and that wasn’t ideal or what I was hoping for. But other than that, I think I managed to stay focused and stay in my own bubble and enjoy it out there. It was obviously windy today as well but some of the tees were moved up a little bit, so I think it played even a little bit shorter today. I wanted to try and score a little bit lower than I did, but overall, I feel happy with how I played and hopefully I can get a good score tomorrow.”

Luna Galmes of Spain moved up eight places into second position after a superb four under 68 round headlined by an eagle on the par-5 second hole. En route to cutting Strom’s lead to two shots, Galmes had a seesaw run on the front nine where she birdied three holes- three, eight and nine- but dropped two shots on number one and seven for a magnificent three under 33.  Two birdies on the back nine plus one bogey were enough to earn the Spaniard the bragging rights for the lowest round of the day.

Defending champion Esther Henseleit moved into third position after posting three under 69. A flawless performance by the German saw her birdie the par-5 number two before notching an eagle on number 11 to remain firmly in contention. She is tied in third with compatriot Sophie Hausmann on level par gross.

Emma Grechi from France bounced back today with a fine one under 71 to move up to fifth. The day one runner-up had a bogey free first nine where she birdied number six and eight but her charge was brought to an abrupt stop when she dropped two shots on number 18 to neutralize the birdies she had picked on 11 and 17. Day two runner-up Nuria Iturrioz dropped out of the top-3 after carding four over 76 in a round that was dampened by a whooping seven bogeys.

South African Lee-Anne Pace remains the highest placed African after today’s round of one over 73 saw her retain her place in the top-10 in position T8. Eswatini’s Nobuhule Dlamini shot a successive three over 75 to drift 10 shots off the pace.

Kshs 3 million up for grabs at Safari Tour season finale