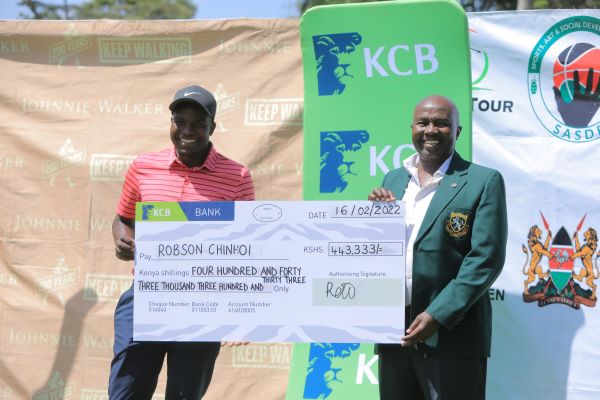 Zimbabwean Robson Chinhoi had a highly successful Safari Tour season 2021/22 winning more than Kshs 1.65 million in the seven Safari Tour events held in Kenya. Despite finishing second in the Tour Order of Merit, Chinhoi’s 12% claim of the Kshs 14 million prize purse saw him outperform his arch rival Dismas Indiza who made Kshs 912, 000 but retained the top position in the order of merit, thanks to the points obtained in the two previous seasons.

Chinhoi and Indiza were the most consistent players all season with the Zimbabwean winning four of the seven events, finished T5 at Sigona, seventh at Nyali but failed to make the top-10 at the Great Rift Valley leg. Interestingly, Indiza failed to register a single win this season!

“This is well-deserved. I have been in very good shape this season. I have really been hitting it well and I am feeling very confident as we approach the Magical Kenya Open,” Chinhoi summed it up after winning the final leg at Muthaiga.

Simon Ngige retained his place on the podium after making Kshs 808,000 to finish third both on the money list and Tour order of merit. His best moments were at Nyali and Karen where he finished second and third respectively.

The Tour brought together more than 74 professional players from East, Central and West Africa including close to 30 foreigners. Uganda with 10 players accounted for the bulk of the visitors closely followed by Zimbabwe with eight.

The foreigners took home more than Kshs 5 million of the prize money representing close to 35% of the bounty. Apart from Chinhoi, Malawi’s Paul Chidale was the second highest earner at Kshs 492,000 to overtake Uganda’s Deo Akope who failed to build on his maiden win at Nyali.

Overall, the foreigners won five events- Chinhoi (Muthaiga, Karen, Limuru and Vetlab) and Akope (Nyali), while the locals only triumphed twice through David Wakhu at Nyali and amateur Taimur Malik at Sigona.

A total of 18 players- seven Kenyans and 11 foreigners- did not make any money at all despite featuring consistently. The lowest paycheck during the season, Kshs 6,349, went to Richard Ainley.