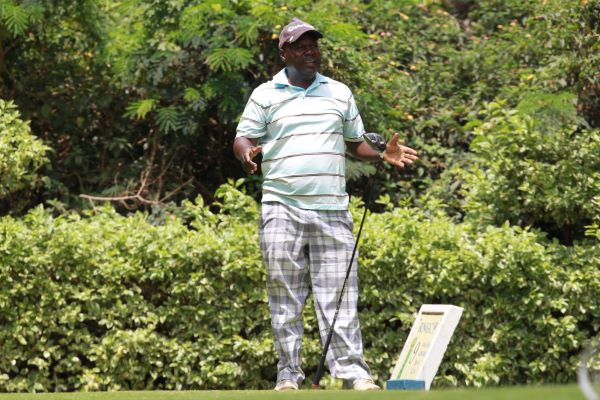 The Zimbabwean duo of Visitor Mapwanya and Robson Chinhoi are involved in a neck and neck battle for the seventh leg of the Safari Tour title after going clear at the summit today.

Round two joint leader Mapwanya shook off Simon Ngige after carding two under par 70 to head to the clubhouse with a stroke advantage over compatriot Chinhoi.

The contest between the joint leaders playing in the final group was lively as leadership exchanged hands on numerous occasions. It was a cagey affair as the duo dropped a shot each on the front nine. Mapwanya proved to be a handful for Ngige at the turn where he shot three under par as the Kenyan played level par to drop to third, two shots behind the Zimbabwean.

Chinhoi took advantage of Ngige’s slip to surge into second position with the day’s best round of five under par 67. Starting the day four shots off the pace, Chinhoi managed to cut the deficit to one and will be going for a back to back double with a win tomorrow.

Veteran Dismas Indiza shot the second best round of the day, 68, to enhance his chances of taking a shot at the title. Playing alongside his nemesis Chinhoi in the second last flight, Indiza was rewarded for aggressive play as he moved into fourth position, four shots behind the leader.

Youthful Mohit Mediratta recovered strongly today after his round of 68 catapulted him back to the top 10. Currently tied in sixth position, the Sigona player stands a good chance of closing the gap on Jastas Madoya and Edwin Mudanyi in the fight for Magical Kenya slots.

In a rare show of might, foreign pros maintained a strong presence in the top 10 as Zambian Sydney Wemba (5th) Zimbabwean Nyasha Muyambo (T6) and Nigerian Sunday Olapade navigated safely through the penultimate round to preserve their places on the high table.

The final round is expected to be a tough affair going by today’s course set up. Only nine players registered sub-par rounds today, a sharp drop from a record 24 witnessed yesterday.