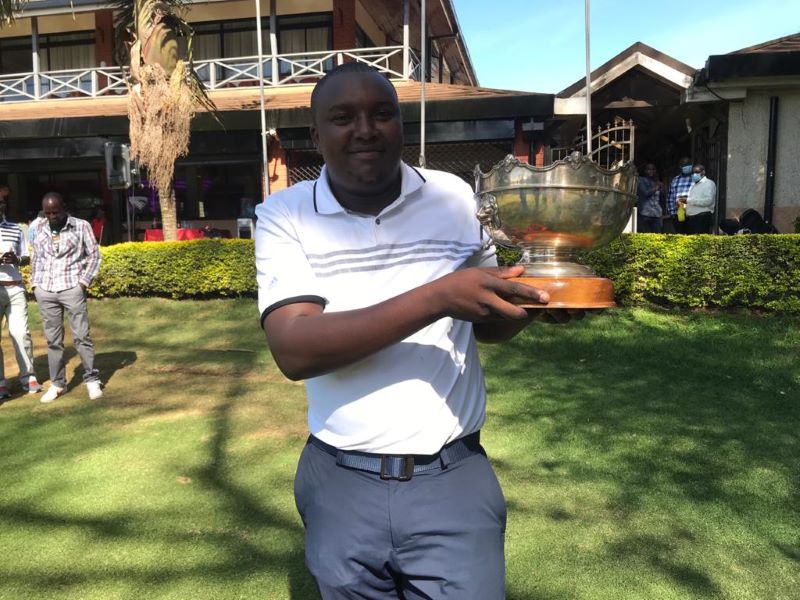 Michael Karanga was forced to dig deep with a brilliant 0ne under 70 round today to win the Muthaiga Open, ending a six-month trophy drought. The Kiambu Club player carded two over 215 gross in the 54-hole Kenya Amateur Golf Championship series event to finish two shots ahead of red-hot Jay Sandhu.

Karanga who has been steady throughout the weekend was placed second after the opening round 73, a shot behind round one leader Dennis Maara and went on to seize the leadership after 36 holes after shooting one over 72 to go into the final round with a stroke advantage. He finished the job calmly today after surviving a final round scare from the fast-charging Sandhu.

“I want to ensure that I am in great shape this season ahead of international amateur events. It has always been my dream to play for Team Kenya so I will still turn out in several KAGC events and hopefully win a few before turning pro later this year,” Karanga said in an earlier interview.

It was heartbreak for Sandhu who was hoping to bag a third victory this season at Muthaiga. The Royal Golf Club player recovered well from a poor start that was him shoot 76 to lie in a lowly 20th position. Sandhu carded an encouraging 72 in the second round which moved him to sixth then followed it with a superb 69 today that hauled him to second. He will be happy with a return of 48 points which ensures that he extends the lead in the KAGC order of merit as he keeps alive hopes of reclaiming the country’s no. 1 amateur title.

Player-of-the-moment Njoroge Kibugu finished joint second, his best performance in the KAGC series. Starting the final round one shot behind Karanga, the teen amateur played level par today for a +4 gross to finish two shots behind the leader. He is for sure a strong contender this season if he manages to play in several events.

Elsewhere, the Valspar Championship race remains wide open with a crowded leaderboard featuring a mix of big names and unheralded players. Davis Riley, a 25-year-old PGA Tour rookie, shot a 9-under 62 to take a two-shot lead over Matthew NeSmith in the penultimate round. Justin Thomas shot a third consecutive 66 to go into joint third with defending champion Sam Burns. Riley and NeSmith who are ranked 399 and 279 respectively in the World Golf Ranking will be in the final group Sunday. Both will be looking for a first victory on the PGA Tour.

Follow all the final round action on SuperSport live from the par 71 Copperhead Course at the Innisbrook Resort and Golf Club in Palm Harbor, Florida. Visit www.dstv.com to subscribe or upgrade, and join in on the excitement. And while you’re on the move, you can stream matches on the DStv App.