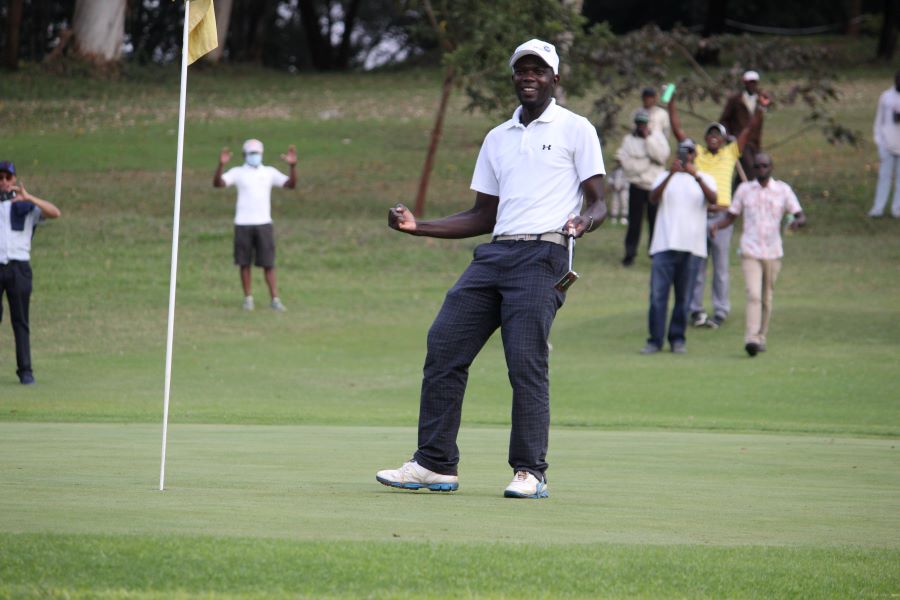 Makokha, Mulama tops as Balala closes in at Strokeplay championship

Vetlab’s Isaac Makokha shot a high round of four over 76 today but still managed to go joint top during the second round of the 45th edition of the Kenya Amateur Strokeplay Championship at the par 72 Vipingo Ridge.

The strong winds continued to cause havoc as the elite amateurs struggled in vain to break par with the average scoring for the 10 best performers today standing at 75. Makokha started steadily carding six back –to-back pars before dropping three shots on the front nine after a double bogey on the seventh and a bogey on the ninth. The downward spiral continued as the former Kenya Matchplay Champion recorded four straight bogeys before he recovered remarkably with three birdies on number 14, 15 and 17.

Golf Park’s Sammy Mulama remained on course to clinch his maiden title despite shooting a messy five over 77. Mulama started today’s round with a stroke advantage after carding two over 74 yesterday but ran out of steam as the chasing pack upped their onslaught. He had a topsy-turvy round that saw him drop shots on four holes including a costly triple bogey on the par-four number 10 but a pair of birdies on number 11 and 12 enabled to cling on to the 36 hole-lead. Mulama will have to be at his best over the next two rounds ward off the threat posed by defending champion Adel Balala.

Balala got his challenge back on track today after he shot the day’s best round of one over 73 to move into joint third with Dennis Maara on 153 gross. In a stark contrast to yesterday performance when he surprisingly carded 80, Balala was in his element today dropping four shots but priceless birdies on number six, 12 and 15 were enough to rekindle his dream of a back-to-back triumph.

There were no major casualties as 21 players were jettisoned from the championship after failing to make the 181 gross cut leaving behind a field of 49 players. Apart from pocketing Kshs 115,000, the winner will get an automatic entry to the 2023 Magical Kenya Open. The Kenya Amateur Matchplay Championship and the Kenya Amateur Strokeplay Championship are considered the most prestigious events in the Kenya Golf Union calendar.

How to take a relief drop