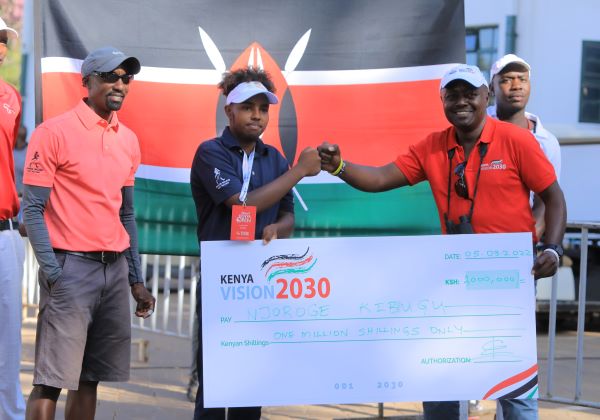 Amateur Njoroge Kibugu dropped out of the top 10 after carding two over par 73 in the penultimate round of the Magical Kenya Open at the tough playing Muthaiga Golf Club. The afternoon players had a torrid time adjusting to the strong winds and the sun-soaked greens as Scotland’s Ewen Fergusson shot five under 66 to open a healthy four-shot lead.

Backed by a boisterous home crowd Kibugu started cautiously navigating the course safely until he dropped his first shot at the par-5 number seven after overshooting the green with his third shot. The junior golfer recovered fast enough with a tap-in birdie on number 10 but dropped another shot on the par-3 number 11 after failing to find the green off the tee. A birdie on 18 minimized the damage occasioned by a pair of bogeys on number 14 and 16.

“I enjoyed it. I tried to do the best I can. Just seeing the people there supporting was the best thing about it. Experiences have matured me, big tournaments, and also my coaches have helped me develop this attitude. It’s amazing this week, it’s different, when I look on TV and see my name, I don’t believe it’s me but it’s a good feeling. I feel like I belong, but give it a couple more years. I just want to smile more tomorrow, crack more jokes with my caddie,” said Kibugu who was rewarded Kshs 1 million sponsorship by Vision 2030 for being the only Kenyan to make the cut.

Starting the day in second position one shot adrift, Fergusson was on level terms with overnight leader Shubhankar Sharma on the first hole with a timely birdie. He took the outright leadership after Sharma dropped a shot on number 2. An eagle on the par-5 fourth saw the Fergusson take full control of the day’s proceedings. Three birdies on the back nine were enough to open a healthy lead at the penultimate stage of the competition.

Said Fergusson: “I was playing really well coming into the day, made a nice birdie on one which I think really settles you down a little bit. I managed to plod my way along. I made a couple of mistakes which, when you’re playing well, you still come out with par – get up and down from 70-80 yards for pars and that keeps the momentum going. It would be unbelievable to win obviously… so I’ll try my best tomorrow and try grind out the win but if it doesn’t happen I’ll be back again for another chance.”

Marcus Kinhult shot seven under 64- the round of the day- to move up to joint second with China’s Ashun Wu. The Swede who started the day outside the top 20 dropped one shot on the front nine after birdieing four holes. He maintained the fine run on the back nine where he carded a superb four under 31 headlined by an eagle on the easy-playing number 18. Currently ranked outside the top 100 on the DP World Tour, Kinhult will be chasing his second win on the Tour tomorrow. Wu pushed his way into contention after dropping only one shot all day for a strong five under 66 to take his week’s gross to -10.

“I hit some good shots, gave myself a couple of ten-footers and managed to hole them so it was fun. I’ve been pretty aggressive on the par fives, especially at 18 there, hitting driver and threading the gap between the bunkers and if you do that, the ball runs forever. I think I’ve been hitting wedge, nine iron or eight iron into that green. If you hit a good tee shot you have a pretty good chance to make eagle or birdie,” said Kinhult.

Overnight leader Sharma’s chances suffered a blow following an erratic display on the windy afternoon. A poor start on the front nine was followed with another disastrous performance on the back nine where he dropped four shots including a double bogey on the easy-playing number 17. Four players- Sebastian Garcia, David Horsey, Jorge Campillo and Matti Schmid are tied in fourth, five shots off the pace. South African Dean Burmester dropped out of the top-5 after shooting a calamitous nine on the par-3 number 13. Burmester who had started strongly with birdies on number four, seven and 10 failed to read the wind conditions well choosing to attack the dangerously-located pin his ball finding the water thrice.

The winner of the Magical Kenya 2022 edition will take home Kshs 37 million while the runner-up and third ranked players will earn Kshs 24 million and Kshs 14 million respectively. Follow all the action from the Magical Kenya Open at the Muthaiga Golf Club on live DStv. Visit www.dstv.com to subscribe or upgrade, and join in on the excitement. And while you’re on the move, you can stream matches on the DStv App.