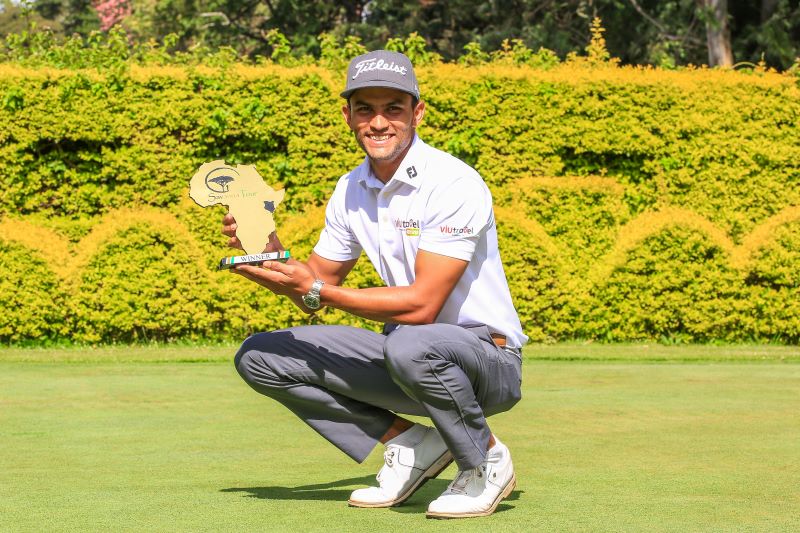 Greg Snow made it two victories in three attempts on the Savannah Tour after carding four under par 68 today to outclass a field of 51 pro and elite amateur golfers. Snow dropped only one shot on the par-3 no.4 to beat the chasing pack of three players by one shot in the hotly contested round.

The Muthaiga player, who won last week’s round at Limuru, birdied three holes on the front nine- 4, 7 and 9- and put the icing on the cake with two more birdies on the back nine-10 and 14- to walk home with Kshs 100,000.

“My ball-striking was really good today. I only made one mistake on hole number three where my putting was not very good… The weather was perfect compared to last week; there was hardly any wind, and that was very good for most of us,” said Snow.

Unheralded Isiah Omwoyo led three players in a joint tie for second after returning an impressive three under 69. Omwoyo, an unfamiliar face on the podium, started brightly with a birdie on the first hole but failed to build on the momentum when he dropped a shot on no.3. A birdie on no.7 briefly brought him back in contention before a costly bogey on the par-3 no.11 derailed him. A strong rally in the closing holes which saw him birdie three of the five last holes earned him Kshs 52,000.

The experienced duo of Daniel Nduva and Edwin Mudanyi failed to outduel Snow despite matching his two under 34 on the front nine. Nduva’s dropped shot on no. 11 and Mudanyi’s conservative play that yielded only one birdie on the back nine saw the youthful pros fall short by only one shot.

Ebill Omollo was the best placed amateur after he fired one under 71 to finish in a respectable seventh position. Playing on his home course, the youngster had threatened to cause an upset after birdieing four of the opening seven holes but failed to hold the nerves with a double bogey on the par-4 no.9. He was forced to defer his dream after registering back-to-back bogeys in the final holes.

The Savannah Tour is a weekly 18-hole developmental tournament which is self-funded by players, Taufiq Balala and IMG Sports.