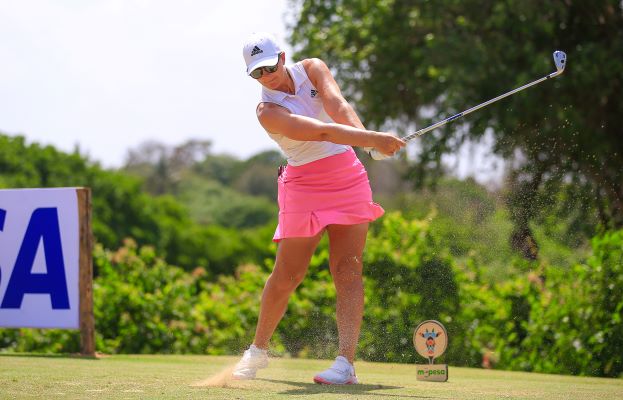 Sweden’s Linnea Strom shot four under par 68 to assume overnight leadership on the opening day of the Magical Kenya Open at Vipingo Ridge today. The 26-year-old world number 216 birdied three holes on the front nine and four on the back nine but dropped four shots including a double bogey on number 16 to go two shots clear at the summit.

“The wind was tricky out there and the course was pretty firm, so if you don’t hit it where you want to it can pretty much bounce anywhere. I’m pretty happy with my score today, though there are still some things I need to figure out especially managing the windy conditions, “said Strom.

Emma Grechi from France is placed second after carding two under par 70 to stay a shot ahead of tournament favourite Swede Julia Engstrom. The Swede who has won on the LET twice, made a strong return after a long layoff occasioned by a back injury posting one under par 71 to stay three shots off the pace in third position.

Said Engstrom: “It was tough out there, we were quite happy at the beginning to not have the wind, but then it picked up. The greens are hard, and the fairways are hard too, so it just kept on bouncing.”

Defending champion Esther Henseleit from Germany had a slow start after a round of two over par 74 left her in position T15 six shots behind the leader.

The Kenyan brigade found the going tough failing to master the strong winds and dry course. Mercy Nyanchama was the best placed local in position T70 after shooting seven over par 79, four shots better than compatriot Naomi Wafula in T87. Faith Chemutai, +17, and pro Bhavi Shah, +20, prop the leaderboard in position 93 and 94 respectively.