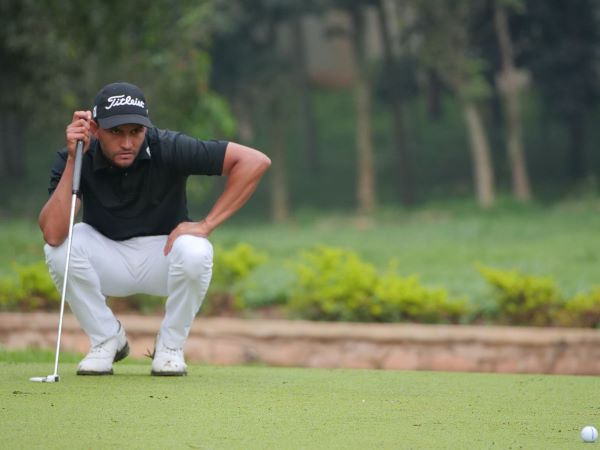 Daniel Gavins shot a magnificent seven under 64 round to take the early lead at the Magical Kenya Open 2022 at the Muthaiga Golf Club. The 30-year-old Englishman birdied five holes on the front nine for a decent 31 on the turn and followed it up with four birdies on the back nine. Two dropped shots, thanks to back-to-back bogeys on the par-3 13th and 14th, limited his overnight lead to one shot.

“It was pretty rusty to start with. I hadn’t played for a couple of weeks but I just started holing a few putts. My swing has been a bit off at the start of the year and I’ve been struggling a little bit with finding the feeling, but today I felt a few things that were nice and it was positive really, “said Gavins who holed 70-footer putt on the par four number nine to keep alive his dream of a second win on the DP World Tour.

Johannes Veerman is one shot adrift after the US pro shot six under par 65. Veerman who is also chasing a second win on the Tour eagled the number 10 par-5 to a set in motion a perfect run on the back nine where he birdied number 12, 17 and 18. A pair of birdies on the front nine- number 4 and 5- minimized the damage occasioned by a dropped shot on the par four number 8.

“It’s felt great to hit two good shots to open with at the tenth, and it was basically a tap-in for eagle. I mean, it doesn’t get much better than that! “When you get off to a start like that it jump-starts things, you get more confidence after only hitting two golf shots. When I birdied my third hole, from there I was just on cruise control. This course is very tight; I cannot stress how big these trees are. You think you can take these carry lines but you can’t because these trees are 40 yards tall,” said Veerman who is currently ranked 53rd on the DP World Tour.

India’s Shubhankar Sharma is keeping Veerman company in the second position after a bogey-free 65 round set him on course to claim his third win on the tour. The 25 year-old who confounded many when he finished second at the Abu Dhabi HSBC Championship last month is the highest ranked player in the field, currently occupying position five on the DP World Tour.

Defending champion Justin Harding got off to a slow start with an opening round three under par 68 to stay four shots behind the leader. The South African dropped two shots all day- on number 8 and 9- in an impressive performance that saw him sink one birdie on the front nine followed by a haul of four on the back nine.

It was an underwhelming day for the locals as only one player- Njoroge Kibugu- posted an under par round. Kibugu, an amateur playing at Kenya Open for the first time, exhibited courage and confidence to return a one under par 70 score headlined by three birdies on number three, four and 18. Greg Snow carded level par, one shot better than another amateur Adel Balala. The home players have a mountain to climb tomorrow as they will have to play aggressively to make the cut.

“The course set up is totally different from what we are used to. The greens are hard and very fast while the course is playing long. I had a few problems off the tee but I am happy my good short game bailed me out in most instances,” Kibugu observed.

Follow all the action from the Magical Kenya Open at the Muthaiga Golf Club on live DStv. Visit www.dstv.com to subscribe or upgrade, and join in on the excitement. And while you’re on the move, you can stream matches on the DStv App.