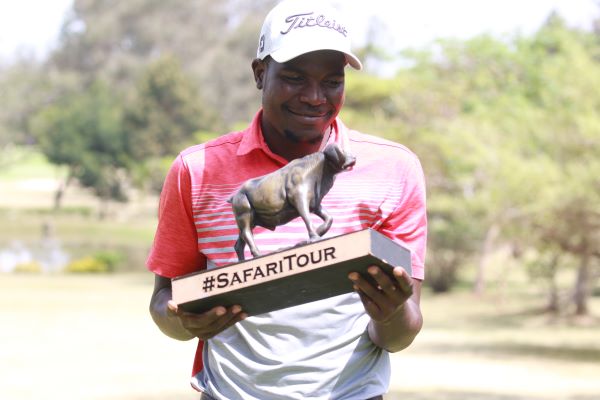 Indiza had elbowed his way into the playoff after erasing a four shot deficit with a labored two under par 70 to tie with Chinhoi on -12 gross. The Zimbabwean was off-colour today and uncharacteristically carded one over par 73 to open the window for Indiza.

Chinhoi clinched it on the third play-off hole after the two had tied on level par in the opening two holes. He killed off the match with a nervy seven-foot putt as Indiza uncharacteristically missed a routine three-foot putt, squandering the chance to extend the match to a sudden-death shootout.

It was a tense match as both players shot par on the opening two holes in the three-hole shootout. There was little drama on the opening 10th hole as the protagonists played safe for par. Matters began to light up when Chinhoi decided to drive the par four number 11 green.  His ball however clipped a tree to the right but the Zimbabwean was fortunate to have it deflected back to the fairway where he managed a par. Indiza struck a brilliant approach wedge to 10 feet to the cup but missed a decent birdie chance to extend the contest to the third playoff hole.

With adrenalin kicking in, both players missed the fairway on number 12 but it was advantage Indiza as he overshot the green but was well positioned to convert for birdie while Chinhoi chipped short leaving him with a monstrous birdie putt. An easy tap in par saw the Zimbabwean bag Kshs 274,221 while Indiza’s bogey earned him Kshs 191,579.

The win was a sweet revenge for Chinhoi who lost to Indiza in a playoff at the same venue last year. He becomes the first player to win three events on Tour this season after winning at Vetlab in October and picking another victory in Limuru a fortnight ago. The win also enhances his chances of winning this season’s Order of Merit after he finished second to Indiza last season.

It was a day of heartbreak for frontrunners Simon Ngige and Visitor Mapwanya from Zambia after they finished third and fourth respectively despite having led in the 54 holes. A penalty drop on the 18th hole all but ended Muyambo’s hopes of clinching his maiden win on the Tour. Enjoying a stroke advantage, the 54-hole leader found the going tough in the final round and dropped four shots to finish fourth, two shots off the pace.

Simon Ngige, the 36-hole leader, finished third after carding level par 72 in the final round for -11 gross to extend his trophy drought on Safari Tour.

The final round of the Tor will be held at Muthaiga Golf Club next week.

Naomi Wafula excited to go up against top golfers