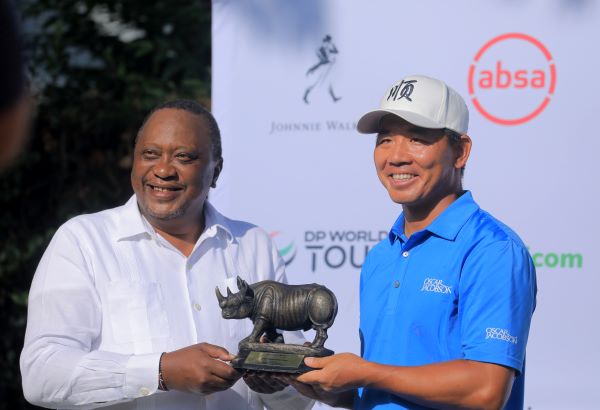 China’s Ashun Wu won the Magical Kenya Open 2022 on his debut after carding six under 65 today for -16 gross at Muthaiga Golf Club. The win, his fourth on the DP World Tour, came on a day of high drama that saw 54-hole leader Ewen Fergusson collapse after failing to handle pressure at the top.

Playing in the second last team, Wu seized the leadership from the Scot on the front nine when he birdied three holes to capitalize on Fergusson’s woes. Fergusson enjoying a four shot advantage at the start of the day dropped out of contention after dropping three shots on the front nine leaving Ashun to share the lead with South African Thriston Lawrence.

Wu, who enlisted the services of a local caddie, took the outright lead after birdieing number 10 and increased the lead to two shots after Lawrence dropped a shot on number 14. After a conservative play between 11 and 15 protecting his lead, Wu went aggressive in the final two holes with back-to-back birdies. He finished his round in style with a perfect bunker shot for a tap-in birdie on number 18.

“It’s a very good feeling today to win this championship. It was very tough today. After two rounds I told myself, if I can make five under every day on the weekend and finish 15 under, I think I’ll have a chance to win the tournament. Today I was four shots behind and still playing to my plan. Five under was my goal today and after ten holes I had a good felling, and I told myself I’ll keep playing and make a couple of birdies and it’s fine,” said Wu.

Following today’s win, Wu now has six victories as a professional in 158 appearances making him the most successful Chinese player in the history of the Tour, with four wins – two clear of Li Haotong, Liang Wenchong and Zhang Lianwei have one win each. He moves to a high 157th position on the Official World Golf Ranking, from 342nd.

Lawrence’s brilliant -5 round today hoisted him to second jointly with Germany’s Hurly Long and Aaron Cockerill. He dropped one shot on the back nine after a flawless display on the front nine where he carded five under 31 buoyed by an eagle on the par-5 fourth hole.  Long had a bright start with a birdie on the first hole and went on to pick four shots that got him into contention but his surge was brought to an abrupt stop after back-to-back bogeys on number 13 and 14. Cockerill’s 67 closing round was enough to earn him a place on the podium.

Kenya’s sole survivor Njoroge Kibugu finished the tournament on a low note after today’s six over 77 round saw him drop to position 64. It was a long day for the star amateur as he failed to register a single birdie in a round that consisted of four bogeys and one double bogey.