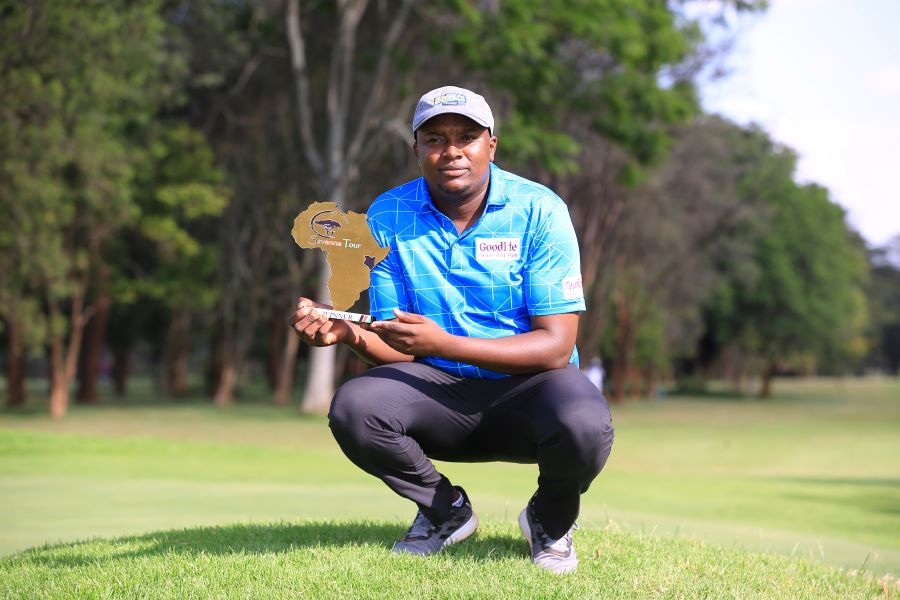 Red-hot Mike Karanga claimed the fourth leg of the 18-hole Savannah Tour after carding five under 67 to destroy a strong field of top professional and amateur golfers at Karen Country Club.

Karanga who lost to Greg Snow in a three-way play-off a fortnight ago was in superb form on the front nine where he birdied the first three holes before going on a run of six pars to sign out three under 33. The Kiambu Golf Club player maintained the form on the turn with another flawless display that earned him back-to-back birdies in the final two holes for an impressive 67, one shot better than the chasing trio of Isiah Otuke, Jacob Okello and amateur Dennis Maara.

“I am very excited about this win today given that we had a very strong field here. I played my best golf and everything just turned out well. My driving has really improved while I am also putting quite well,” said Karanga.

The Savannah Tour organizers had to slash Karanga’s prize money to Kshs 115,000 from Kshs 144,000 to conform to the recently amended global golf rules that allow amateurs to win up to USD 1,000 when playing in a scratch competition. The balance of Kshs 29,000 will be used to top up next week’s prize purse.

It was a second heartbreak for Otuke on the Tour after he dropped a shot on the par-4 no.17 to finish runner-up again. The Vetlab player seemed on course to improving on his second place finish on the home course last week after matching Karanga’s three under 33 on the front nine. A run of three birdies on no.10, 12 and 15 was blighted by a bogeys on 14 and 17 leaving Otuke with a deficit of one stroke. The joint runners-up took home Kshs 87,000 each while another trio of veterans John Limb and Dismas Indiza together with Sujan Shah and Edwin Mudanyi finished joint fifth on three under 69 to bank Kshs 48,000 each.

A total of 13 players shot under par in what turned out to be Savannah Tour’s lowest scoring round. “We set up a very balanced course today. The course was playing medium length while the pin positions were in places where the ball can actually stop. Our objective is not to set up a punitive course but we also ensure that we adhere to international standards so that the players can actually test their ability in fairly tough conditions, “said S.K Mwaura, Savanna Tour Tournament Referee.

A total of 80 players featured in today’s competition which had an enhanced purse of Kshs 800,000. The next round of the 18-hole weekly competition will be held next week.