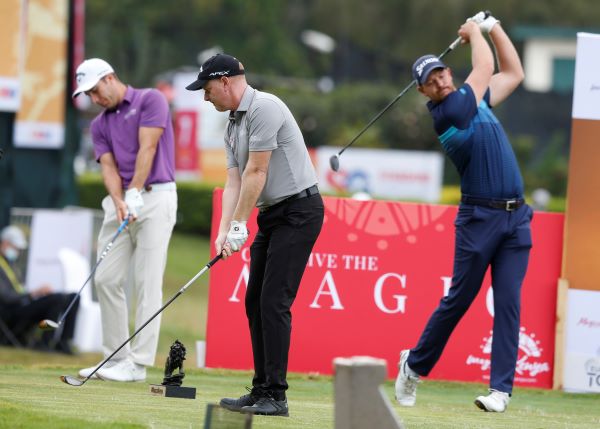 The stage is set for the Magical Kenya Open 2022 with a strong field featuring 19 of the top-50 ranked players on the DP World Tour, formerly Euro Tour, expected at Muthaiga Golf Club next week.

The highest ranked player in the field is India’s Sharma Shubhankar who’s currently second on the DP World Tour order of Merit. The 25-year-old earned his stripes last month after finishing second at the Abu Dhabi HSBC Championship ahead of renown stars like Rory McIlroy, Viktor Hovland and Ian Poulter. Defending champion Justin Hardin currently in position 11 on the Tour is the second MVP ahead of Poland’s Adrian Meronk. Other highly ranked players on the Tour include South African Lombard Zander (17) and Scotland’s Jamie Scott (20)

Interestingly, five of the players who finished in the top-10 at the Magical Kenya Open 2021 will be in the mix again this year. They include defending champion Hardin, Scot Syme Connor who finished third and Garcia Rodriguez from Spain who was placed fourth. Other top finishers include South Africans Jacques Kruyswijk (T5) and Dean Burmester (T8) and Pep Angels of Spain who finished T8. They will be joined by former champion Guido Migliozzi and Savannah Classic champion Daniel van Tonder.

The hugely experienced field boasts of a combined 109 wins on the Tour. Spaniards Quiros Alvaro and Gonzalo Fdez-Castano with seven wins apiece, top the table one win better than Joost Luiten from Netherlands and South Africa’s Richard Stern. A total of 46 players who will be at Muthaiga next week have won on the Tour. Other multiple winners on parade will be Englishman David Howell and South Africans Darren Fichardt and George Coetzee.

More than 31 nations will be represented at the four-day tournament. England has the highest representation with 25 players followed by South Africa at 17 while Kenya wraps up the top three with 15 players, including six amateurs, on the 150-man list. Six slots are yet to be filled following late withdrawals.

Meanwhile on the PGA Tour, action resumes tonight at The Honda Classic which is being staged at the PGA National Resort & Spa in Palm Beach Gardens, Florida. Defending champion Matt Jones will be up against tough opposition from the likes of former champions Brooks Koepka and Sungjae Im. Other top challengers include Genesis Invitational winner Joaquin Niemann, Rickie Fowler, Billy Horschel and Louis Oosthuizen as 12 of the top 50 golfers in the OWGR tee off.

SuperSport will bring all the action live from the par 70 PGA National Resort & Spa Champion Course as the stars play for the $8million prize money. Visit www.dstv.com to subscribe or upgrade, and join in on the excitement. And while you’re on the move, you can stream matches on the DStv App.